Congratulations to Dr. Bryan Reece, whose PhD thesis, “The Ontology, Etiology, and Moral Psychology of Action: Aristotle and Today”, was successfully defended in August this year. Bryan’s supervisor was Prof. Lloyd Gerson; other committee members were Brad Inwood and Philip Clark. This year Bryan is a Lecturer in the Philosophy Department at the University of Toronto, teaching courses on Aristotle, human nature, and early modern philosophy.

Congratulations to recent CPAMP graduate Nathan Gilbert, who will be a Junior Research Fellow at the University of Durham, U.K., starting in fall 2016! Nathan received his PhD from the Classics Department in 2015, for his dissertation, “Among Friends: Cicero and the Epicureans”.

Willie Costello, a recent CPAMP graduate,  has been appointed a Mellon Postoctoral Fellow at Stanford University, a three-year position starting September 2015. Willie completed his PhD in the Philosophy Department in April, with his thesis “From causes to Forms: the Phaedo and the foundations of Platonic metaphysics”.

Congratulations to Willie Costello and Nathan Gilbert on the successful defenses of their excellent dissertations this week. Well done Dr. Costello and Dr. Gilbert!! Willie Costello’s thesis is entitled “From Causes to Forms: the Phaedo and the Foundations of Platonic Metaphysics”. It was directed by Rachel Barney and the external examiner was Sarah Broadie (University of St. Andrews). Nathan Gilbert’s thesis “Among Friends: Cicero and the Epicureans” was supervised by Brad Inwood. Catherine Steel (University of Glasgow) took part in the defense as external examiner. 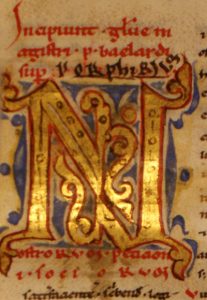 Peter King and Christopher Martin (University of Auckland, NZ), who recently spent a year at the University of Toronto as PIMS/CMS Distinguished Visiting Scholar, are organizing a conference on the later logical writings of the 12th-century philosopher Peter Abelard, concentrating on the Logica nostrorum petitioni sociorum and the Glossae secundum vocales. The conference takes place at Trinity College, Cambridge, UK from February 13 to 16, 2015. The programme includes presentations by Peter King, Christopher Martin, John Marenbon, Onno Knepkens, Klaus Jacobi, Sten Ebbesen, Catarina Tarlazzi, and Riccardo Strobini. Funding for this conference has been provided by the Social Sciences and Humanities Research Council of Canada, the Collaborative Programme in Ancient and Medieval Philosophy at the University of Toronto, Trinity College in Cambridge University, and a research grant from the University of Auckland.

Congratulations to Matthew and Michael Siebert! Both successfully defended their doctoral dissertations at the end of July. Matthew’s dissertation is entitled “Knowing and Trusting: the Medieval Social Epistemologies of Augustine and Aquinas”. Michael’s thesis is devoted to “Platonic Recollection and Illumination in Augustine’s Early Writings”. Well done! Matthew is now a postdoc at the University of Saint Louis.

CPAMP is putting in a strong presence at the upcoming second Canadian Colloquium for Ancient Philosophy (University of British Columbia, May 2-4, 2014). Lloyd Gerson, Juan Pablo Bermúdez Rey, Nathan Gilbert are either presenting or commentating. Among the other speakers are CPAMP alumni Margaret Cameron and Monte Johnson. See here for a complete program of the event.

Congratulations to Lloyd Gerson on the publication of his new book From Plato to Platonism. To quote from the publisher’s description: “Was Plato a Platonist? While ancient disciples of Plato would have answered this question in the affirmative, modern scholars have generally denied that Plato’s own philosophy was in substantial agreement with that of the Platonists of succeeding centuries. In From Plato to Platonism, Lloyd P. Gerson argues that the ancients were correct in their assessment. He arrives at this conclusion in an especially ingenious manner, challenging fundamental assumptions about how Plato’s teachings have come to be understood. Through deft readings of the philosophical principles found in Plato’s dialogues and in the Platonic tradition beginning with Aristotle, he shows that Platonism, broadly conceived, is the polar opposite of naturalism and that the history of philosophy from Plato until the seventeenth century was the history of various efforts to find the most consistent and complete version of ‘anti-naturalism’.”

Congratulations to our colleague Lloyd Gerson who just published a new translation of Plotinus’ Ennead V.5. Here’s an excerpt from the book cover: “Platonists beginning in the Old Academy itself and up to and including Plotinus struggled to understand and articulate the relation between Plato’s Demiurge and the Living Animal which served as the model for creation. The central question is whether “contents” of the Living Animal, the Forms, are internal to the mind of the Demiurge or external and independent. For Plotinus, the solution depends heavily on how the Intellect that is the Demiurge and the Forms or intelligibles are to be understood in relation to the first principle of all, the One or the Good. The treatise V.5 [32] sets out the case for the internality of Forms and argues for the necessary existence of an absolutely simple and transcendent first principle of all, the One or the Good. Not only Intellect and the Forms, but everything else depends on this principle for their being.”

Congratulations to Brooks Sommerville. Last week he successfully defended his thesis “Plato, The Hedonist?”. The thesis examines Plato’s view on pleasure from the Protagoras to the Philebus. Brooks, who is currently teaching at Colgate University, was supervised by Rachel Barney. Well done, Dr. Sommerville!